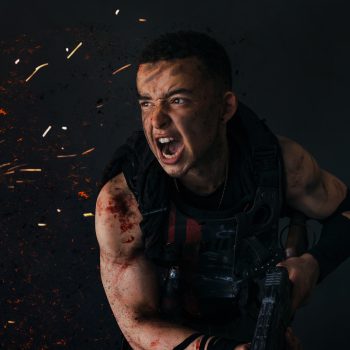 When you’re a NAC (non-automated combat) Soldier in the Rak War… you know life is short. It’s nice to have someone like TEER in your platoon who knows how to kick ass and keep things in perspective.

Born and raised in Los Angeles, California, Taj Speights began his professional acting career at age 9 as Darwin in an NBC pilot Zip. Since then he played several guest star roles in series such as ABC’s Eastwick, MTV’s Teen Wolf, CBS’s NCIS, ABC’s Marvel’s Agents of Shield, and more recently Comedy Central’s Dream Corp, LLC and ABC’s Fresh Off the Boat as well as many others. Taj has also booked several leads in pilots for Disney, Nickelodeon and NBC and will soon be seen the comedic sci-fi short film The 716th.

Taj is also a writer and comedian. He started making Youtube videos from a young age with his sister and friends. Taj is also a trained dancer and is known around the world for his break dancing skills, going by the nickname “King Krash” of the X-Mob Crew. After graduating high school, he attended Cal State University of Northridge until booking a recurring role on a Nickelodeon series.

Taj is also is a huge fan of Marvel and is quite the comic book aficionado with an impressive collection!