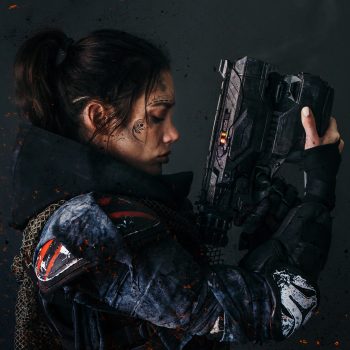 A soldier with a massive secret who doesn’t believe in the words “quit.” Played with fierce strength, comedic wit and voracious heart by the talented and beautiful Lauren McFall.

An accomplished college and extreme sports athlete with a natural talent for costume and art design, Lauren McFall’s first steps in the industry began on-stage as a stand-up comedian in LA. After begin cast off her sets in small acting roles and a few national commercials Lauren decided to take a more serious look at acting.  She moved to NYC to study acting with Larry Moss and Reed Birney. Lauren found a way to channel the fierce physicality she had learned as an athlete into her acting work and never looked back. Lauren has found life behind the camera as well producing and creating the web series ‘Splinter and April’ where she acted alongside a puppet of her own design. Lauren is excited for her debut performance in the comedic sci-fi adventure film The 716th as the heroic soldier Scout and will make her directorial debut later this year with the horror/comedy ‘What the Cat Dragged In’.