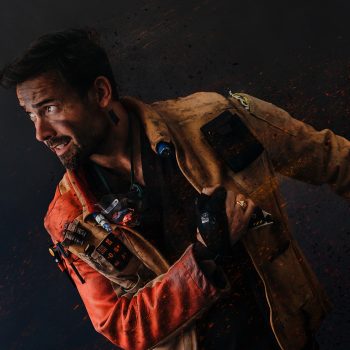 Han Solo with a scalpel. Played by Andrew Bowen, DOC is a boy scout driven by an unwavering need to always do the right thing. A trait, that often puts him in “less than ideal” situations.

Raised on Marvel Comics, pop culture and the movies of Cameron, Spielberg and John Hughes, Andrew Bowen is an artist whose passion for life, character-driven storytelling, science fiction and comedy has been the driving force behind his more than two decades of work in the film and television industry. Andrew’s remarkable ability to transition from comedy to drama, both in-front and behind the camera, enthusiastic work ethic and infectious love for film has produced a rich filmography that includes working with such entertainment greats as Gale Anne Hurd (Aliens, The Walking Dead), James Mangold (Ford VS. Ferrari) and Lasse Hallström (What’s Eating Gilbert Grape).

Since his debut as a series regular on MAD TV (where his impressions of Keanu Reeves and Nic Cage are legendary), Andrew has worked steadily as an actor appearing in over 250 film and TV productions from SHAMELESS to NCIS and over 150 national commercials. He has also lent his Voice Talents to brands including JEEP, LEXUS and McDonald’s and been featured in some of the most successful video game titles of all time.

Some notable acting credits include his work opposite Uma Thurman in romantic short film THE GIFT, as the repulsive Reggie the horror anthology HOLIDAYS, his multiple incarnations of Jack in the AWARD-WINNING independent feature A BOY CALLED PO and as the voice Johnny Cage in WB’s hit video games MORTAL KOMBAT X and MORTAL KOMBAT 11.

Andrew’s received praise recently for his work behind the camera with his award winning comedic sci-fi, action-adventure short film The 716Th. Written, produced, edited, production designed, starring and directed by Bowen,  the VFX heavy sci-fi short film landed the honor of world premiering at The 2018 Tribeca Film Festival. The shorts hugely entertaining combination of comedy, characters and scope (a remarkable feat considering his a budget of only 10K budget) – and overwhelmingly positive reception by audiences and critics led to its digital release on Amazon Prime Video. Andrew is currently working closely with literary agent Joe Fronk (Artistry), attorney Andrew S. Howard (Jackoway Austen Tyerman) and producing partner Jon Alvord (VFX supervisor and producer on The 716th) on 17 other films and TV projects he’s developed including an expand TV version of The 716th, his comedic family adventure trilogy THE MCAULIFFE EQUATION and his psychological horror film/creature feature SCENT.

Bowen will be seen next starring opposite Grant Harvey and Gia Mantegna in the hilarious comedy ALL FOR NIKKI premiering May 12th, 2020 on AppleTV.