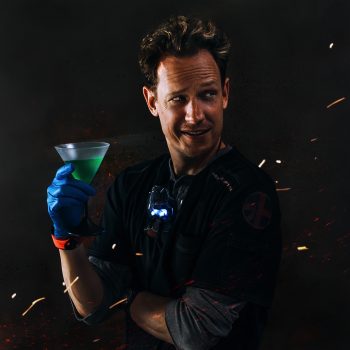 Meet ASH-117. He is the best surgeon in the galaxy… something he’d have no problem telling you.  Played by the multi-talented JOHN ASHER.

John is a writer/director who has spent, literally, his entire life in the business. His father, William Asher, was the original director of I Love Lucy (1951) and creator of Bewitched (1964). John himself can boast some notable accomplishments, having directed his first film at 21, Kounterfeit (1996), starring Oscar winner Hilary Swank. He then went on to direct Kirk Douglas, Dan Aykroyd, and Lauren Bacall in Diamonds (1999) for Miramax. He also directed Chick Flick (1998) and his movie, Dirty Love (2005), premiered at Sundance. Branching into the television world, John directed the Showtime series, Going to California (2001), and the hit series, One Tree Hill (2003). In 2013, he directed Somebody Marry Me (2013), the first romantic comedy shot in one continuous 98-minute take with no cuts. His latest feature, A Boy Called Po (2016), is his most important to date, having won best film at the festivals. The story follows one family’s journey with autism. The film is close to Asher’s heart, as his son Evan Asher has autism, and John hopes the film will bring better awareness and acceptance of autism to the world.